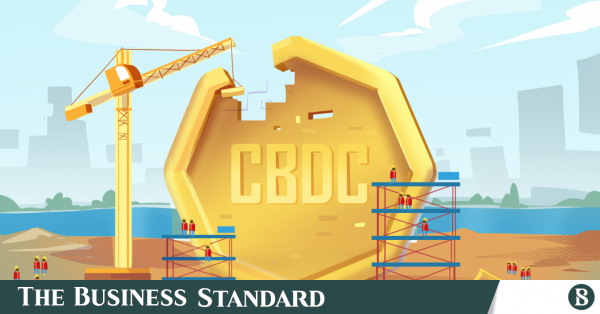 Cryptocurrencies have incredibly popularised in recent times. They have become a talking point, whether we use it or not; whether we understand it or not.

While technology experts, enthusiasts (the likes of Elon Musk) are endorsing and promoting the use of cryptos, traditional authorities who have control over fiat currencies (the likes of central banks) are being cautious and they are sounding the ominous bells.

In many extreme cases, the authorities outright ban the use of cryptos altogether. For instance, in Bangladesh, use of cryptos such as the Bitcoin, Ethereum, Dogecoin, etc, are not legal.

Cryptos are associated with high ideals, such as they are decentralised and untraceable: key reasons why they are being valued by tech connoisseurs. However, because of these exact reasons the government and central banks fear them so much.

Their fear, nonetheless, is justifiable. In fact, central banks might be put into an existential crisis. And if a government cannot control its money, it will most certainly start to lose grip on many aspects of its sovereignty.

Bangladesh Bank, the central bank of Bangladesh, has recently decided to examine the viability of launching a “central bank digital currency” (CBDC), which is supported by blockchain technology.

So, a feasibility study is expected to be conducted soon.

According to media reports, the Finance Minister AHM Mustafa Kamal disclosed the idea in the proposed budget for the financial year 2022-23 on 9 June in parliament. He did so in order to emphasise the rising vulnerabilities that are associated with the usage of virtual currencies such as cryptocurrencies.

However, he also noted that many central banks across the globe are striving to introduce electronic versions of domestic currencies as a replacement (alternative, rival or substitute) to cryptocurrencies to ease virtual transactions and to support startups and e-commerce enterprises.

These measures, he added, are being taken in an effort to foster innovation and entrepreneurship.

By stressing on the significance of the growing need for virtual currencies, the finance minister said, “As a result of the time-befitting steps of the present government, the coverage of the internet and e-commerce in the country has increased tremendously.”

To this point, the Bangladeshi administration has taken a highly sceptical approach toward the usage of cryptocurrencies such as the Bitcoin, Ethereum, and others. To date, several individuals in various occasions have been taken into custody for their involvement in unlawful activity involving cryptocurrency.

For instance, the Bangladesh Bank reaffirmed its position on cryptocurrencies in July 2021 and requested that all parties involved desist from engaging in their transactions, business and exchanges in order to prevent potential financial and legal consequences.

It was stated that the Foreign Exchange Regulation Act of 1947 does not support the use of such currencies, and that conducting online transactions in such currencies may constitute a violation of the Money Laundering Prevention Act of 2012.

Now is a good time to delve into this matter. A spate of questions come to mind but the most fundamental one is: How is CBDC different from cryptocurrencies and why is the Bangladesh government showing interest in rolling out its own CBDC?

What do experts think?

He added that “Digital Taka” would surely make the economy more dynamic. It will also ensure transparency as there will be an audit trail. As it will be based on blockchain technology, the security will be ensured as well.

“In most countries like Bangladesh, where cryptocurrency trading is not allowed, the central banks are wary of losing control. But in the digital age, one cannot keep one’s eyes and ears shut and not adopt new tech,” said Almas Kabir, adding, “Blockchain based cryptocurrency will become more and more popular, whether the government wants it or not.

Therefore, I have been advocating for keeping an open mind and have been urging Bangladesh Bank to start researching on the matter. If BB can introduce its own cryptocurrency as China has recently done, it can keep some control over it.”

On the flipside, former governor of Bangladesh Bank, Dr Salehuddin Ahmed sounded rather cautious and dubious of the prospect.

According to him, there are many pressing problems in Bangladesh banking sectors, and digital currency should not be an urgent priority now. Through credit cards, online and mobile banking, people are already transacting money digitally. He emphasised that that should be the priority.

“There are no immediate benefits of CBDCs. Moreover, these systems consume high resources, from electricity to storage facilities and the overall infrastructure.

Economically advanced countries can spare the expense but for BB, this might not be a good idea for the moment,” he added.

First, let’s get the concepts straight and then figure out the motivations behind the governments’ moves.

CBDCs and cryptocurrencies are both digital currencies. While a central bank backs and regulates and issues a CBDC, a crypto is run on distributed ledger-technology. What it does mean for crypto is that the system is decentralised, and there is no central command but multiple devices all around the globe that verify and check transactions.

Moreover, when crypto is mined, a CBDC is issued. And unlike crypto, CBDC is under control of the central bank just like fiat money.

Digital currencies have multiple uses, and the rationale for producing CBDCs varies. However, some of the most popular motives include reducing transaction costs and enhancing efficiency; generating programmable money and improving transparency in money transactions; and facilitating the smooth and simple movement of monetary and fiscal policies.

According to “CBDC Tracker” of the Atlantic Council, a US-based think tank, 105 nations are reviewing a CBDC of their own. Three countries – Jamaica, the Bahamas, and Nigeria – have debuted a CBDC with 39 countries in the advanced stages of rolling out (pilot, development and research).

As of May 2020, only 35 nations were considering a CBDC. And only two years later, the number of countries accessing a digital currency has risen to 105 in May this year. 16 members of the G20 countries have a CBDC in development or pilot stage, including South Korea, Japan, India and Russia.

The European Central Bank has made it clear that it intends to work toward introducing a digital version of the Euro by the middle of this decade, although the United States and the United Kingdom seem a little behind on their CBDC development.

Of the G7 economies, the US and UK are the farthest behind on CBDC development. The European Central Bank has signalled it will aim to deliver a digital euro by the middle of the decade.

In February this year, our neighbouring country India – with whom we make many initial comparisons – made public its plans to launch its central bank-issued digital currency. The digital rupee (name of the digital currency) is expected to be initiated during the next financial year.

Pakistan and even Nepal and Bhutan have already expressed interest, along with India. So, Bangladesh seems a little late.

In the span of a few years, governments are gradually taking a more serious look at their own digital currencies. There is an obvious rush amongst the central banks. The growing interest in CBDCs is in part a response to the meteoric rise in popularity of cryptocurrencies, which are not governed by monetary policy and are something that nations have a manifest desire to have some kind of control over.

Under the same breath, Bangladesh Bank certainly does not want to be left out or fall behind just as central banks around the world are doubling down on their efforts because they most certainly do not want to lose control of currencies.

So, if you ask what spurred the decision, the answer is that the Bangladeshi government is following the global trend.