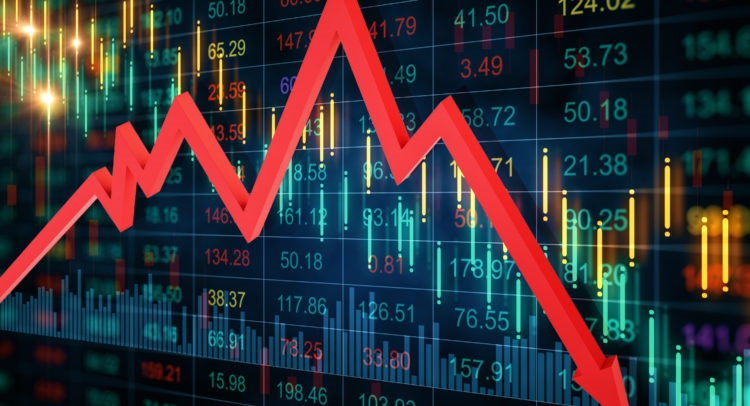 Stock futures dipped amid mounting concerns of a sharp economic slowdown. Moreover, investors are also anxious about the upcoming key economic data and earnings reports from major corporates this week.

Pinterest (PINS) released lackluster second-quarter earnings results on Monday. However, highly regarded activist investor Elliot Management’s simultaneous announcement saying that they are the largest investor in the company saved the PINS stock from falling. The stock price soared more than 21% in the after-hour trading session.

The after-hours movement came after the major stock averages ended in red on the first day of August. On Monday, the S&P 500 closed 0.28% lower led by a decline in oil prices, while the Nasdaq 100 inched down 0.06%. On the other hand, the Dow shed 0.14%.

Seven S&P sectors ended Monday’s session in the negative, led by energy which dropped more than 2% as oil prices dipped.

The strong relief rally in July does not seem to convince investors that the bear market is over, as the headwinds are too strong. The fear of a recession lasting longer than that of 2020 still looms large. The economic data that are coming out in regular intervals are also not giving any significant reason to rejoice.

On Monday, surveys of purchasing managers revealed that the U.S. manufacturing industry was the slowest in two years this July. However, the slight easing of commodity prices provided some respite from the constant worry, indicating that the Fed’s hawkishness might be starting to bring results.

Later this week, the July nonfarm payroll data are due out on Friday. This report will give investors a further view of the job market.

As if these are not enough, the Biden administration is now having to make amends to the exorbitant tariffs made by the Trump administration on about $350 billion worth of Chinese goods.

On Monday, the government reached its deadline to defend Trump’s China tariffs, after the former administration faced legal suits from numerous American importers in September 2020.

If the present government cannot justify the tariffs, then it may have to reassess scores of public grievances on the tax penalties or even reimburse the aggrieved parties. This will add a new blow to the government that is already bogged down by geopolitical and other economic concerns.

Amid such tense environment, House Speaker Nancy Pelosi expressed her intention to meet government officials in Taiwan this week, despite Beijing’s warnings against taking such a step. With the geopolitical situation already sensitive, Pelosi’s visit might fuel further tensions between the U.S. and China.

Included in the climate bill is a recent deal between Senate Majority Leader Chuck Schumer and centrist Senator Joe Manchin . The Mountain Valley Pipeline project, which might be permitted as part of the deal, will link gas producers in Manchin’s home state to buyers from other states.

However, Republicans are not convinced, arguing that the bill will not bring down inflation and will likely be detrimental to the economy.

The after-hours movement came after the major stock averages ended in red on the first day of August. On Monday, the S&P 500 closed 0.28% lower led by a decline in oil prices, while the Nasdaq 100 inched down 0.06%. On the other hand, the Dow shed 0.14%.

Trading news 0
In this article, we're going to evaluate the use of one of the most